Now that the weather has turned colder and wetter, I find myself craving soup all the time. So when I saw a recipe for Kale and Roasted Vegetable Soup on The Front Burner, I just had to try it out! And it was just what I craved — hearty and sweet! I pretty much just followed her recipe, with only minor adjustments. I substitued 1 large yam for the sweet potatoes, used low-sodium chicken broth instead of the veggie broth, omitted the coriander because I don’t have any, and sprinkled chopped cilantro on top when the soup was done.

I was excited to cook with a rutabaga! I think it was my first time using one in a recipe. 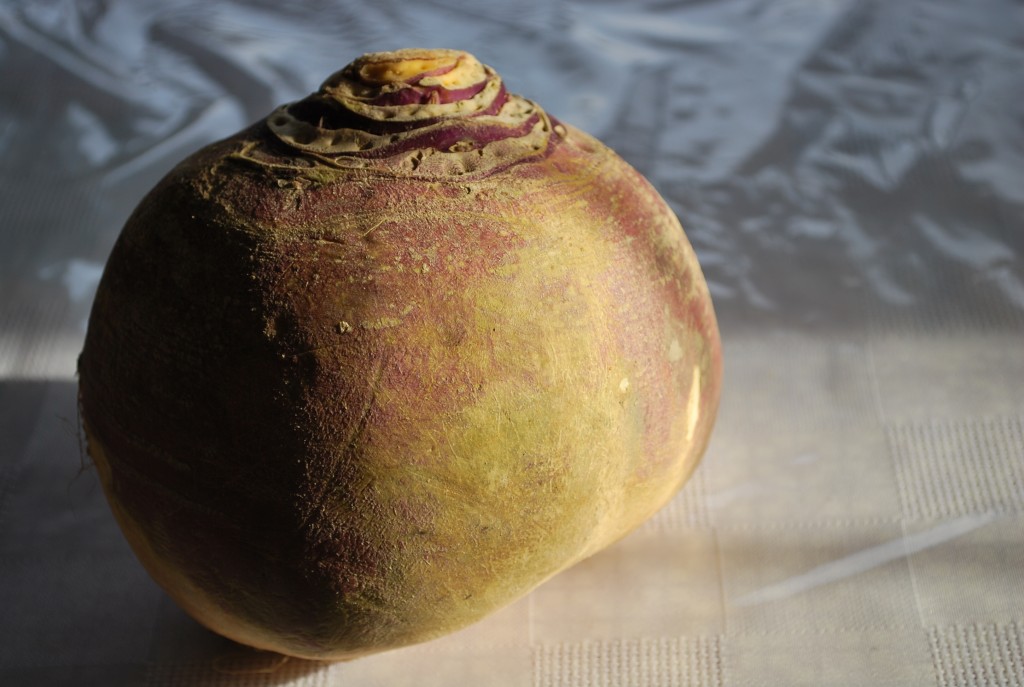 Rutabagas are so cool! Plus, I just love to say rutabaga. Rrrrutabagaaaa. 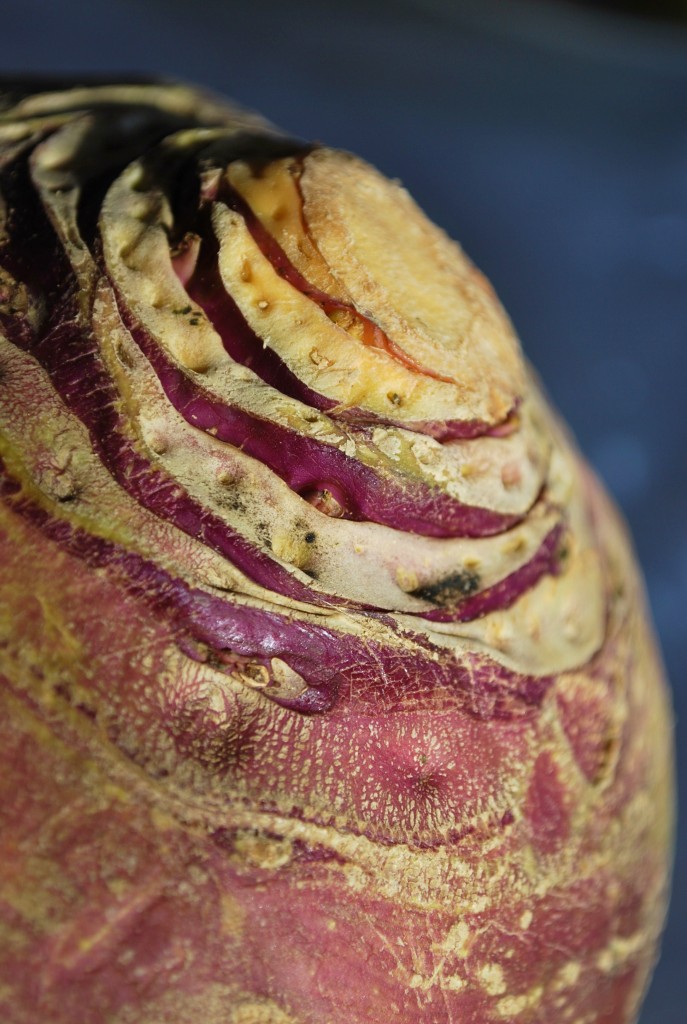 This soup was delicious and super good for you! I urge you to try it out for yourself! And you can substitute a variety of vegetables in place of the root vegetables.

Before I show you a photo of the finished soup, I have a confession to make. I need to tell you about the spectacular FAIL that preceded this next photo. I had painstakingly assembled the perfect-looking bowl of soup, and was in the process of transporting it to a location in the kitchen that had more favourable lighting for photos, when IT happened. The bowl somehow started slipping from my fingers, and before I knew it, it had flown clean out of my hands. I did the whole cartoonish “noooooooo” in slow motion as I watched the contents of the bowl spray ALL OVER the kitchen floor. ALL OVER. (I later found some black beans about 6 feet away from where I was standing). FAIL. I stared in disbelief. And my first thought was, “but it was such a beautiful looking bowl of soup!” Man, I wish I’d thought to take a picture of the mess. Miraculously, the bowl did not break. After I cleaned up the mess and muttered a few choice words to myself, I got a different bowl and re-ladled in my soup.

So finally, the photo was taken after all that:

I looove avocados! So rich and buttery and nutritious too!

And I really liked the kale in this soup. Wish I had put in more, actually! 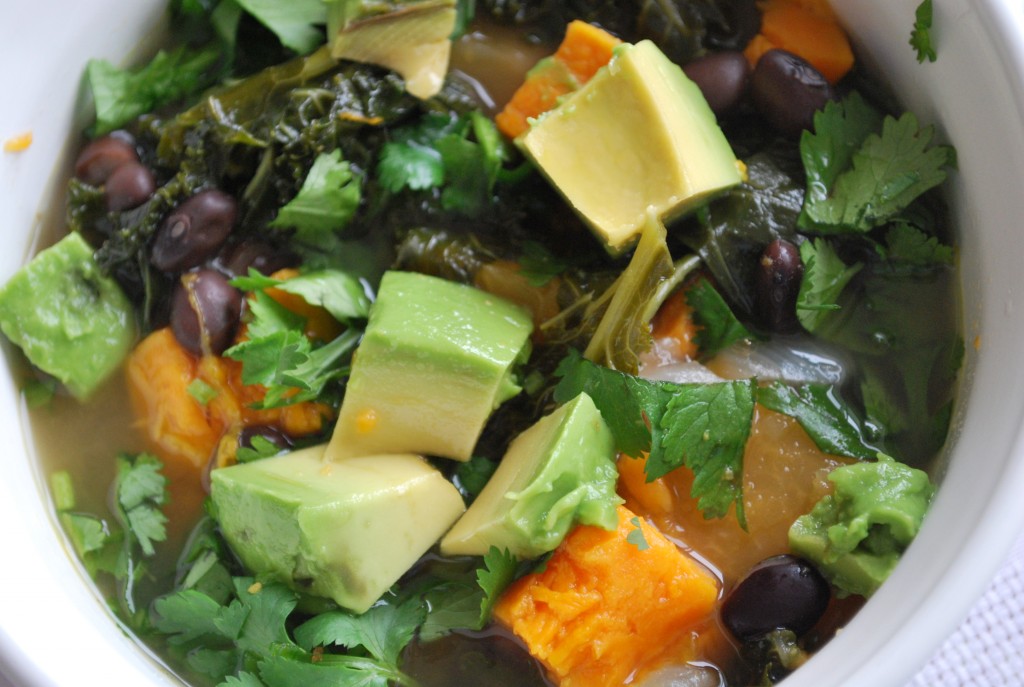 Lately, it’s been all about “firsts” in the kitchen. Today was my first time making Irish Soda Bread. Or my version of it anyway. I was inspired by this recipe on Run, Rant, Realize. I didn’t have a few of the ingredients (which, considering the recipe calls for very few ingredients in the first place, is pretty significant), but I suddenly was seized by the need for instant gratification and refused to wait until I had all the listed ingredients. So I improvised, and the end result was tasty, but I’m not sure I can still call it Irish Soda Bread?

Mix together oats, flours, salt, and baking soda. Melt butter over low heat (or in a microwave if you’re lazy like me). In a separate bowl, whisk egg. Slowly whisk in the milk until fully incorporated. Mix in butter, applesauce, and syrup. Add wet mixture to dry and mix until combined.

Pour into greased loaf pan. Bake for 40-50 minutes (my loaf was done after 48 minutes).

(I’d already sliced a few slices before I remembered to take a picture. What can I say, I have a one-track mind when it comes to food.) 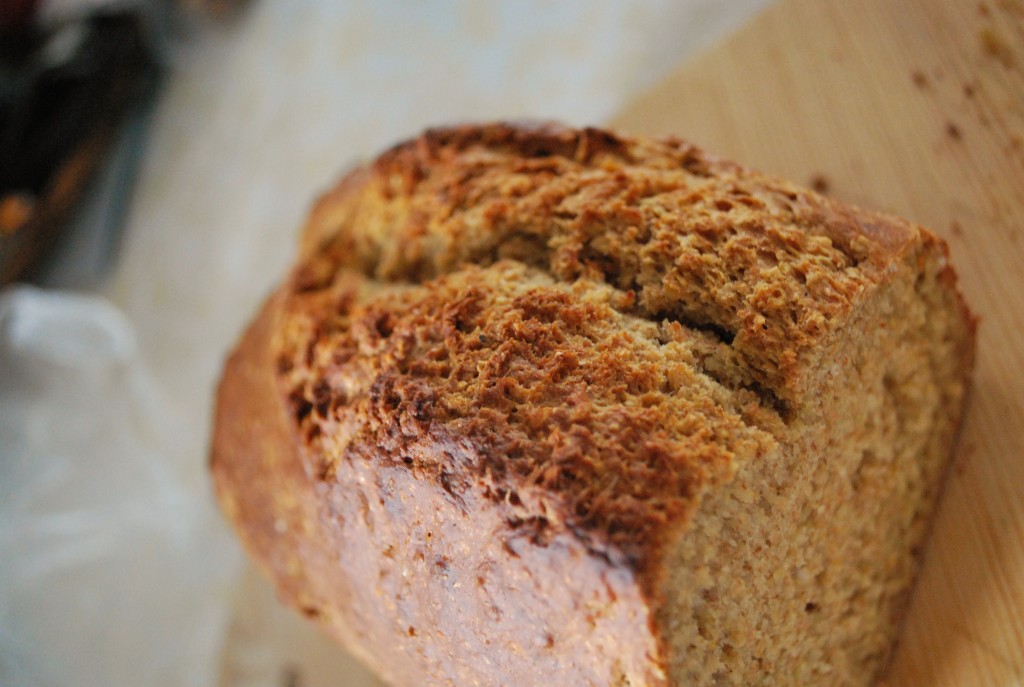 My mom thought the bread was a bit on the bland side, but I really liked it! The texture was amazing…delightfully crusty on the outside, moist and soft on the inside. I’m looking forward to experimenting more with this recipe; anyone know if it would work if I added things like nuts and dried fruit?

Tonight’s dinner featured both the soup and bread. Len made a sandwich with the bread and quite liked it too.

This is a big reason why I love following food and healthy-living blogs; everyday, I get inspired by others’ recipes and start experimenting in the kitchen!

Posted by Sauce on November 17, 2010 in Kitchen Adventures